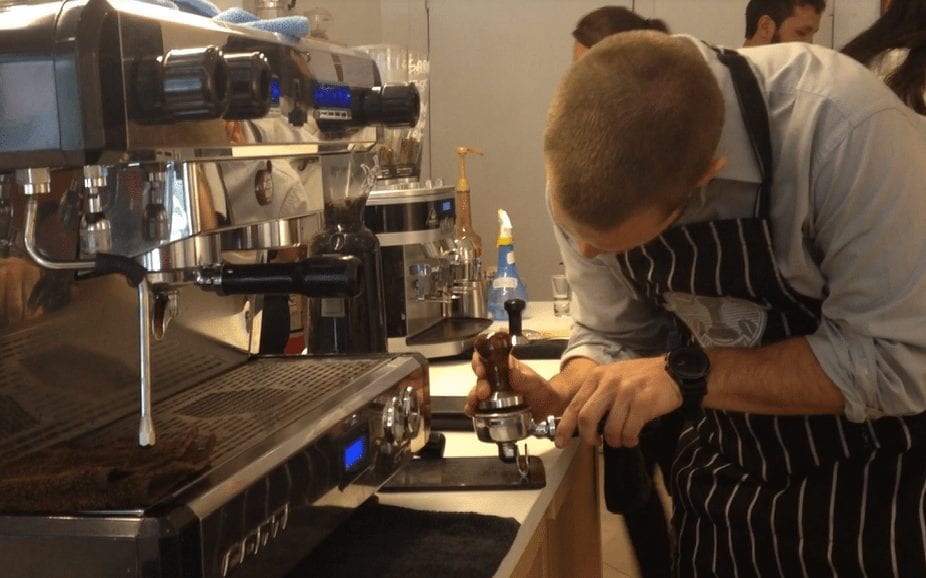 Are You Ready to Be Blown Away by Your Espresso?

There are some cafés that surprise you. Hidden away on a shady street, their facade is unassuming, their interior humble, giving no hint to anything out of the ordinary. Only after that first sip do you realize, quite unexpectedly, that you’ve been served a great cup of coffee. Isveglio (meaning awakening) is not one of those cafés.

SEE ALSO: Are You a Speciality Coffee Lover or a Lover of Cafes?

Isveglio is the kind of café you go to when you want to be blown away by your espresso. Sitting down at Isveglio is similar to sitting down to watch The Fast and the Furious 7, or even strapping into a real-life muscle car: you know when you know that you’re in for a wild ride; the only question is, will you be ready for it?

I didn’t have any idea what I was getting into the first time I visited. Walking in, I thought the logo vaguely reminded of the Empire’s logo from Star Wars (and to be fair, if the Death Star had had a specialty café on the Officer’s Deck, it would be like Isveglio). The interior is sleek and modern. Prints hung along one wall—an artful cappuccino, a Seattle skyline—lend the place a cosmopolitan air.

Three coffees, but really there’s only one choice- try all three

But this is an Ecuadorian café, a fact showcased when you sit down and the barista presents you with the current offerings—a washed, honey and a natural process all based on three different varietals, regions, altitudes, and most importantly, three completely different flavor profiles, and yet all from Ecuador. This is what separates specialty coffee in Ecuador from places like the U.S. or Europe. Whereas, in the latter, a café might offer three different coffees from different parts of the world, in a coffee producing country it’s incredibly rare to find coffee from outside its borders. Far from being a weakness, this enables specialty cafés in source countries to explore all the different factors that can make a single county’s output a wild and varied world. As I found out, you can drink Ecuadorian coffee every day in Quito and never have the same cup twice.

Is Ecuadorian Specialty Coffee Still in Its Adolescence?

On the other hand, it’s worth mentioning that the default difficulty level for Isveglio is undoubtedly set at “advanced.” At this point in time, the story of specialty coffee in Quito is the story of specialty coffee education in Quito, yet having three coffees set in front of you, followed by descriptions of acidity and fruitiness, assumes a high level of familiarity with coffee. It’s clear that Isveglio is concerned more with blowing your mind than holding your hand—and to their credit, they do it well

Quite simply, Isveglio is a barista’s café. The owner, David Miño, has the unique honor of being the first-ever national barista champion of Ecuador (that was in 2012, to give you an idea of how young Ecuadorian specialty coffee is) and in addition to Isveglio, he roasts his own coffee and does professional barista training. He counts among his current and former students various baristas across the city (among them is Diego Escobar at Dulcería Colonial) as well as multiple barista champions and finalists at a national level.

Any conversation about Ecuadorian specialty coffee inevitably turns to how to develop and grow this movement, which is still in its adolescent, if not nascent stages. Education for the general population is a common talking point here, lamenting the uphill battle against dark roasts and sharing, almost therapeutically, stories of customers who added one, two— even three — spoonfuls of sugar to their cappuccino. David, however, has a different—and unsurprising—opinion on how to grow Ecuadorian specialty coffee. Barista competitions.

Continuing to foment the development of baristas is his contribution to Ecuadorian specialty coffee and with his competitive attitude, his ultra-precise style and laser-like focus, it’s not hard to see him soon achieving his goal of competing and winning on an international level.

“Yeah, I tried David’s espresso before it was internationally known.”

While David might have his sights set on coffee glory for himself and international recognition for his homeland, that doesn’t mean he’s not a friendly, outgoing guy. He offered to prepare for me an espresso with the Finca Maputo Tipica Honey, a coffee that already has an international reputation and a cultish local following. He asked me if I would be interested. My palms started sweating and I felt my face flush. Would I be interested in Ecuador’s first barista champion personally preparing for me an espresso with arguably the country’s best coffee? I managed to stutter out an affirmative.

I’m not embarrassed to admit that I was in fanboy mode as David pulled an espresso that positively sparkled. I steeled myself as he handed me the cup. Was I intimidated by the prospect of stepping into the ring knowing I was going to get hit right in the mouth with a fistful of flavor? Yes. But sometimes you have to swallow your fear and swallow your drink. I took a deep breath and a sip. The syrupy, delightfully sweet flavor and robust acidity was overshadowed by the mouthfeel: a tingling sensation best characterized as electric. I managed to keep it together—barely—as I took my final sips, happy to have survived, but sad that it ended so quickly.