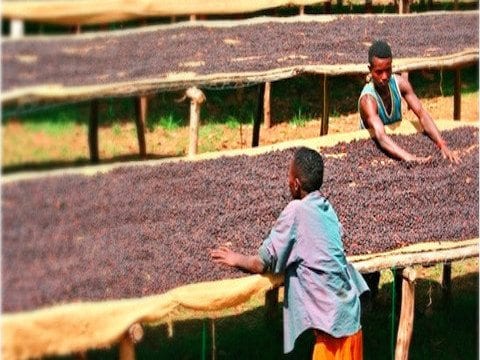 Ethiopia is widely considered the birthplace of coffee. Many experts say that Ethiopia is the only place that coffee grew natively and the apocryphal story of Kaldi is told over and over. Kaldi was a goat herder who discovered coffee after witnessing the vigor that his goats received from eating the cherries. He later brought these cherries to the monastery and shared them with the monks who exclaimed that they were the Devil’s work and hurled them into the fire. The aroma of the beans roasting in the fire was heavenly and the beans were raked from the fire and crushed to put out the embers. Realizing their mistake, they placed them into a jug and covered with hot water for preservation. Later the monks drank the brew and it helped them keep awake during nightly devotions. While this story is fun, in all actuality, it was likely that the people of the nomadic Oromo people first discovered the coffee plant and its invigorating properties. Many such stories about the origin of coffee are apocryphal and its actual discovery is something of much speculation.

Kaldi and his dancing goats

The History of Ethiopian Coffee

The rest of coffee’s history in Ethiopia is quite turbulent. Ethiopia has undergone many changes in their government. In the past 40 years alone, they have had three forms of government, from a militaristic Marxist ideology to the federal system today. Each of these systems have been met with much public dissatisfaction, rebellion, and political upheaval. From 1998-2000 Ethiopia was involved in a war with Eritrea. This conflict with Eritrea (and many other dissension) have led to many deaths and great misery. It also limited access to land and created an economic downturn. The cost of the war was estimated in the billions of dollars.

Amidst the turbulent political and economic climate, the coffee farming in Ethiopia took a big hit. In 2003, the price of coffee plummeted lower than it ever has. The price of coffee was no longer covering the cost of production and, as a result, many farmers abandoned their crops. They were devastated, not having enough money to cover the cost of repairs to their homes, purchase clothing, or provide their children with an education. Many farmers migrated away from their farms to the city while others still remained with their coffee plantations.

Despite all of these hardships and challenges, coffee remains Ethiopia’s biggest export. At times, Ethiopian coffee farmers must compete and pair with larger companies with more power that often take most of the profit. Farmers make very little from these partnerships and women in Ethiopia’s coffee industry make even less, sometimes as little as 20USD a month. In 1957, the National Coffee Board of Ethiopia was formed to help improve the quality of Ethiopian coffee and to coordinate producers traders and exporters. And recently, Fair Trade organizations have been helping to ensure the fair compensation of coffee producers.

The coffee map of Ethiopia

Ethiopia Misty Valley – What Is the Story Behind the Cup?

The Yirgacheffe region of Ethiopia is celebrated for its wet processed coffees. These coffees are processed by removing the fruit and washing the beans before drying. These coffees are very clean tasting and complex, with pleasant acidity and floral notes. Naturally processed coffees have in the past been looked down upon, perhaps because of the crude processing methods. Coffees in the past were dried and allowed to ferment on the floor and on rooftops and this often led to rot or mold.

The Misty Valley region is slowly redefining this negative stigma. Upon researching this region and its farmers, it’s easy to see why. Coffee exporter, Abdullah Bagersh is at the head of this movement. The Bagersh family has been involved with coffee for several generations mostly in the export business. Abdullah himself owns processing facilities in Idido, Beloya and Michile. In an effort to revitalize the art of natural processing, he perfected it, producing coffees that are free of the defect that usually plague natural processed coffees such as over-fermentation or sour tastes.

Great care is shown to ensure the cleanest possible flavor in the cup. When brought to the mill, these coffees are placed on raised beds and turned constantly for 48 hours to ensure even evaporation. This provides remarkable cleanliness in the cup.

After the coffee is dried and the skin, mucilage and parchment are removed and it is traded as a Grade 1 Yirgacheffe

This coffee comes to us by way of Wells Coffee Co in Boca Raton, Florida. The family, including all three children, started out roasting to share with family and friends and as support grew, they realized that they needed a bigger space. Soon after, and with the help of some Kickstarter friends, they opened the first specialty cafe in Boca Raton this year. They now roast for coffee aficionados on an SF-6 (San Franciscan roaster) with hopes of soon opening a webshop and serving their coffees all over the world.

Their motto is “Drink Deeply” and they exhibit it every step of the way. From sourcing the best quality coffees and taking up the cause of the laborers involved. In Brandon’s words, “What we love most is offering excellent coffees that can both serve as a tonic for solitude and an elixir for human connection. It’s not enough for us to simply serve coffee; we strive to curate experiences that create space within the rhythm of people’s lives to drink deeply.”

Measure out 22 grams of coffee and grind to drip setting. Using a V60 and pour-over stand, wet the filter. Place the coffee in the V60. Add just enough water to saturate the grounds and bloom for 45 seconds. Stop pouring when the scale reads 240g. Allow to drip for a 311g yield. Total brew time should be 3:05.

Natural Processed coffees can be a gateway for many into the world of specialty coffee. This coffee from Wells Coffee Roasters is quite possibly the perfect “gateway” coffee. Upon opening the bag, I was greeted with a bouquet of berries. the V60 gave me a magnificently balanced cup with more berries, especially blueberry at the forefront and finishing on very floral black tea, hibiscus flavors.

Where else can you buy this coffee?

Joseph is a remote contributor