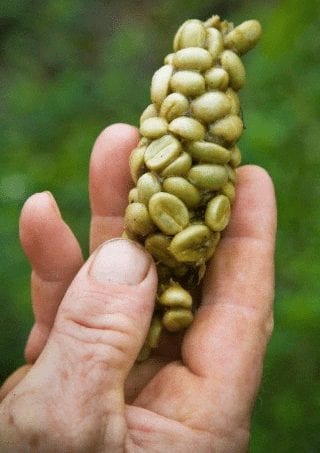 Civet coffee (also known as kopi luwak coffee) was originally drunk because farmers on Indonesian coffee plantations were forbidden to pick coffee beans. The wild civet cat would sneak into the plantations to eat the ripe coffee cherries, and then the workers cleaned their poop to get the beans – without ‘picking’ them of course. Soon after, plantation owners publicised the new supposedly ‘rich aroma’ and ‘smoother flavour’ of these beans.

SEE ALSO: How Many Dollars Does It Cost A Farmer to Plant A Basic Plot of Shade Grown Coffee?

Former director of Taylors of Harrogate, Tony Wild first introduced the Luwak beans back in 1991 where he publicised their unique qualities. And after finding out the truth behind this coffee, he regrets that he’s the one that started it all. “Kopi luwak is now rarely wild: it’s industrialised. The naturally shy and solitary nocturnal creatures suffer greatly from the stress of being caged in proximity to other luwaks, and the unnatural emphasis on coffee cherries in their diet causes other health problems too; they fight among themselves, gnaw off their own legs, start passing blood in their scats, and frequently die.”1 He has even launched a Facebook campaign to highlight the cruelty of the trade and has persuaded the coffee industry to end its fairytale relationship with kopi luwak.

So why has this trade come to despised by journalists and almost all of the coffee community? The BBC went undercover to infiltrate the supply chain in Indonesia. They discovered that farmers use captive methods to harvest up to 135 kilos each month. The civet cats are caged, with each cage only measuring a couple of feet across, causing the cats to have stress-induced behavioural problems. Many of the suppliers filmed openly admitted sourcing their supply from the battery farm operations.

The coffee industry has seen a meteoric rise in demand for civet coffee, partly due to claims such as that the fermentation process is as natural as possible since it occurs in the animal’s digestive tract. Some people feel that this coffee gives a smoother taste, completely disregarding the trade in captivated civets. Is this really where our coffee habits have brought us to?

Civet Coffee Farming Doesn’t Have to Be Cruel

There are some small signs that this industry of cruelty is being finally frowned upon. Some coffee certifiers, including Rainforest Alliance and UTZ, have banned it from production on their estates. When the despicableness of the trade was first brought to light, public outrage caused leading UK retailers, including Selfridges and Harvey Nichols, to stop stocking it.

However, Harvey Nichols has since performed a reversal on their principles. They began doing business with the supplier Rarefied, who claim to be humane civet excrement farmers. Rarefied employ approximately 40 coffee farmers, each of whom has a couple of hectares of land, with a natural environment that is favoured by the luwaks. The processing of the scat is completed at a central processing factory that can immediately tell, by the diversity in their excrement, if the luwaks have been caged or not.

The supplier states that all their farmers are trained and monitored strictly, with any attempts to cage civet cats resulting in a ban. The coffee market has viewed this move as positive, especially because farmers are paid as much as 10 times what a caged luwak farmer would, thanks to the certified supply chain. Some premium high street brands have now picked up on this, such as Harrods, who are selling luwak coffee for around $300 per 100 grams. This sustainable and genuine method that has also seen Tony Wild perform a u-turn, and call for independent certification schemes with a monitoring system to be put in place for any farmer who want to supply the beans.

Is Cruelty to Elephants Our Next Concern?

The trend for coffee beans passed through animal stomachs has continued over to the elephant industry, with similar techniques in Thailand. Black Ivory Coffee Company Ltd. claims that the fermentation of their Black Ivory Coffee is different from kopi luwak, due to elephants being herbivores. The concept is still the same, though. Again, they use animals to naturally create products for our consumption.

The company behind Black Ivory does have promotional videos on their websites promoting their rescued elephant wildlife parks, but can we trust that this won’t change? Look at what happened when the demand for kopi luwak went through the roof. The way it was harvested changed immensely, becoming far crueler.

Black Ivory coffee is sold mostly in the Middle East and Asia, and hasn’t reached the same global notoriety quite yet—but if it does, expect cheaper and even less humane controls on elephant farming, just like with the poor civet.

Colin is a contributor based in the UK