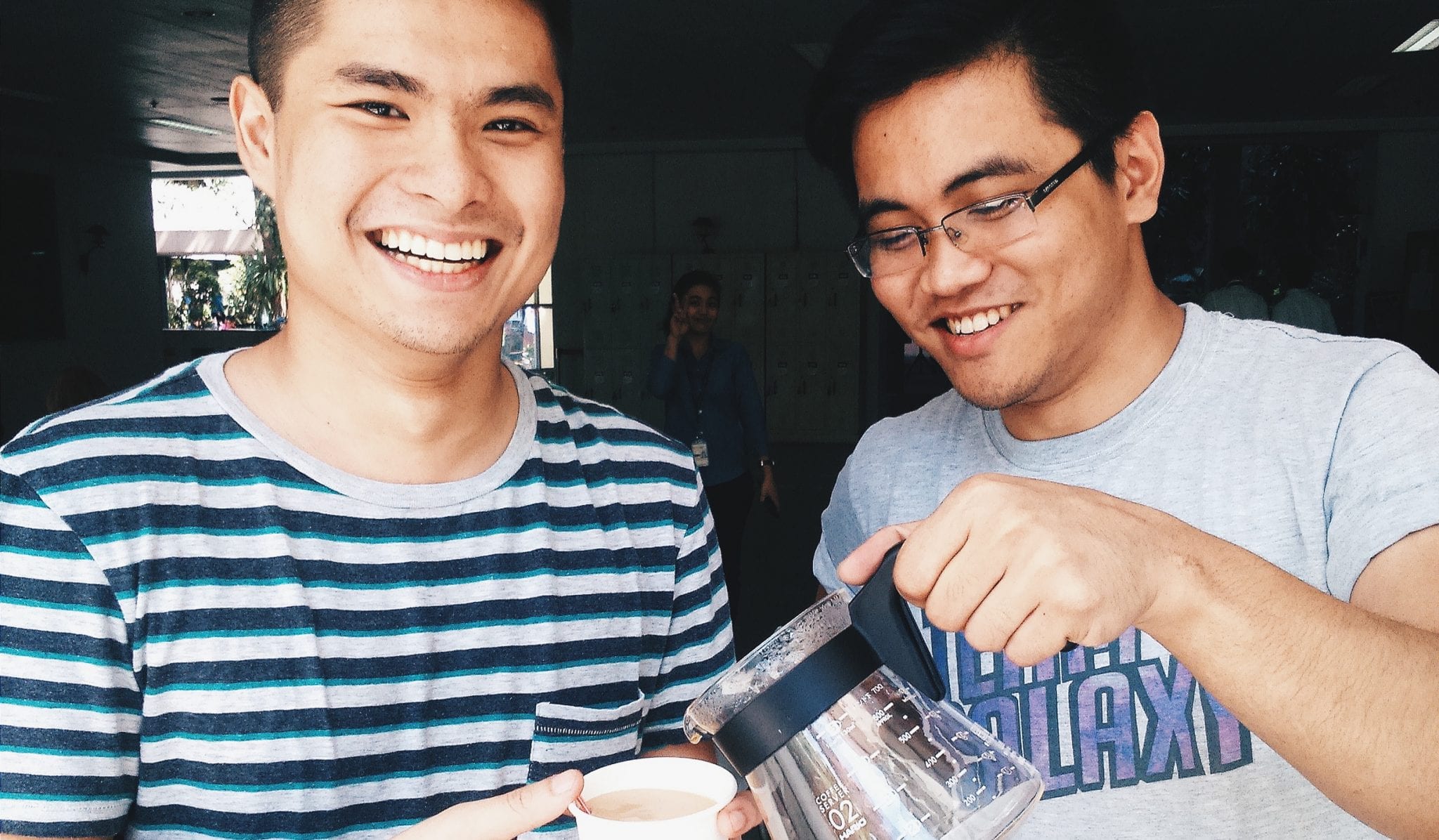 For any coffee enthusiast, the third wave movement of the specialty coffee scene in the Philippines isn’t so new. It was 2012 when specialty coffee shops started opening in the country. 167 kilometers north of Metro Manila (the capital of the Philippines), Luca & Tosh Coffee Lab was set up by JC Martinez in Subic, and started sourcing and roasting coffee from different coffee producing countries and serving it in Hario Syphons. In New Manila, Craft Coffee Workshop (now Craft Coffee Revolution) was opened by Sly Samonte, Raymond So, and Peter Ong – the three were lovers of specialty coffee and all aimed to put up a cafe that focused on enjoying coffee for its flavour and its complexity and educating people about it.22 kilometres from New Manila, in Parañaque, Magnum Opus Fine Coffees was put up by Jonathan Choi to define the specialty coffee experience in that part of the Metro.

SEE ALSO: The History of Rwandan Coffee & The Story Behind Epiphanie Muhirwa

These few specialty coffee shops that were significantly far from each other established themselves as the pioneers in the Philippines. Back when the green mermaid was still dominating the scene, they chose to elevate the coffee culture by purchasing direct from farmers and cooperatives in coffee producing countries and even selling coffee gear to potential home brewers. People were then exposed to the variety of coffees that come from Guatemala, Kenya, Ethiopia, Indonesia, etc. Some liked it and some didn’t. Some thought it was pretentious while others thought it was unique. Some thought it was nothing new while others thought it was the next big thing.

Fast forward to 2015. The Philippines successfully sent Kevin Israel Fortu of EDSA Beverage Design Group and Aldrin Lumaban of Yardstick Coffee to the 2014 and 2015 World Barista Championships respectively. The country has also been successfully hosting national barista championships for the past two years. In addition to all that, Kaye Ong of Habitual Coffee placed third in the recently concluded World AeroPress Championship in Seattle. Those who I knew that didn’t like specialty coffee, they now like it. For those who thought it was pretentious, now they think it’s unique. For those who thought it was nothing new, they now discover a little more about coffee in the little minutes that they now spend tinkering with their coffee toys in their homes. It’s something even thedarkestroast.com would be proud of. Of course, that still isn’t the case for everyone because the Filipino palate is accustomed to coffee that is filled with sugar and cream. Thanks to the slew of new specialty coffee shops and roasters who have opened in the last two (2) years like EDSA Beverage Design Group, Yardstick Coffee, Habitual Coffee, Coffee Empire, Kalsada, The Barista Box, and Plain Sight Coffee Roasters, I’d like to think that coffee appreciation in the Philippines has gone a bit beyond the sugar and cream-filled cups.

What Are the Specialty Coffee Shops Like in the Philippines?

All of the specialty coffee shops opened up their doors to the public and have been very transparent with their coffee origins. You will find the coveted beans from Ethiopia, Brazil and even the highland coffees of Panama. You won’t simply find a third wave espresso culture, but a variety of filter brewing options such as Hario V60s, Kalitas, AeroPress, Clovers and so forth.

These specialty coffee shops pride themselves on their standards of quality and consistent roasting whether light or medium roast. Like in many other specialty coffee scenes around the world, you can also find public cuppings to evaluate roasts and flavour profiles.

The appreciation for specialty coffee has reached groups of people who have spread the word and now it lingers in the minds of middle-class Filipinos who appreciate specialty coffee like fine wine, tea, cheese, or chocolate. This era of specialty coffee in the Philippines and the uplifting of our coffee culture has all been made possible by those early pioneers and loyal consumers.

EDSA Beverage Design Studio, one of the more recent specialty coffee shops in Manila whose mantra is to always pursue the noble beverage – may it be coffee, cocktails, or sodas

The Philippines Has a History Of “Robusta” Coffee Production

Now, I don’t want to step on anybody’s toes here. Not only have the pioneers of specialty coffee in the Philippines driven the love for the bean amongst nationals. The Philippines has always had a strong coffee culture. Out of the 71 provinces in the country, 63 grow and produce coffee on a yearly basis! The country has always been known for its ‘Barako’, a very potent Liberica type of coffee that is primarily found and grown in the province of Batangas, a lowland region that is situated 100 kilometers south of Metro Manila. The Philippines also possesses its own famous mountain coffee from the north and elevated regions, civet coffee, and a vast production of the Coffea canephora species or Robusta coffee. Out of the 88,000 metric tons of coffee that is produced every year in the Philippines, 70% is Robusta. Interestingly, during the 19th century, the Philippines was one of the major producers of Arabica in the world. However, towards the end of the 19th century, “la roya” (coffee rust) began to spread in the country and nearly wiped out the whole coffee industry. Since that incident, the majority of coffee production shifted its focus to Robusta because it was more resistant to the disease.

Incidentally, 70% of the 88,000 metric tons of coffee that is produced every year in the Philippines goes to instant coffee production and most of it is reserved for local consumption. Yes, the Philippines has always had a strong coffee culture, but it has been a coffee culture that is more for mass production and that which is often related to practices that are opposite of the ethos of specialty coffee. The high demand for coffee nationally easily explains that culture.

Why Do Most Filipinos Drink Instant?

On the demand side, an average Filipino would probably be more willing to purchase instant coffee and ‘3-in-1’ coffees because good coffee comes at a price. A sachet of instant coffee from the local “sari-sari” store costs around Php 8.00 (approx USD 0.18), while an espresso or filter coffee from a specialty coffee shop costs around Php 100.00 – 160.00 (approx USD 2.25 – 3.60). Filipinos who belong to the middle and upper socioeconomic class tend to be the major purchasers of specialty coffee. The majority of the country is considered to be living at the poverty line or below it so the instant coffee consumer trends make sense.

How Do Most Filipinos Farmers Operate?

The majority of the poor in the Philippines come from agricultural backgrounds. According to the Department of Agriculture of the Philippines, coffee farms tend to be either smallholders, which are independently owned lots that can be as small as 1.5 hectares and wherein coffee is intercropped with coconut and fruit trees; or plantations, which are public or private lands that are leased by farmers and that can range from 5 hectares to 1,600 hectares. These Filipino farmers sell their green coffee at world prices to middlemen or corporations who roast, distribute, and most of the time, grind their coffee and send them to retailers. The average Filipino farmer disregards the importance of quality coffee, due to either lack of education on the proper processes of growing coffee or placing too much importance on the monetary value of green coffee. There is not much thought put into the harvest, nor how the coffee is to be processed the moment that it is picked from the tree.

Filipino Coffee Production Does Have Potential

I feel that this unfortunate disregard for improving coffee quality doesn’t mean that Filipino coffee cannot rise to its potential. Truth be told, I believe that Philippine coffee has so much potential. Hypothetically speaking, on the supply side, if the 63 coffee producing provinces all aspire together for the better Philippine cup, then standards of agriculture in the country would probably rise and lead to better yields and higher value coffee for farmers.

On the demand side, if more and more people clamor for better coffee, the farmers themselves will be forced to produce a better crop. It’s a coffee revolution that’s waiting to happen and I personally think that we need more specialty coffee shops and organizations to keep fanning the flames in order for that revolution to happen.

Laying the Foundations for Progress- Specialty Coffee Shops and NGO’s

At the background there are people who are currently creating more opportunities for the Filipino farmers by educating them on how to take care of their arabica coffee from seed to cup. They are also giving them due credit by placing their names, origins, and other significant specialty coffee details on the retail bags that they sell. Kalsada Coffee, work with farmers to increase their quality and therefore their incomes and livelihoods, because they think they deserve to be paid what their coffee is worth on the international specialty market, and think it is key to the Philippine coffee industry’s success.

Personally, I would love to see the day when the next Philippine Barista Champion, or even the next World Barista Champion for that matter, will use beans that were cultivated in the Philippines. Thanks to the people who have been pushing for specialty coffee here in the country, I don’t think that the actualisation of that vision is too far off into the future.

Article edited by A. Guerra

M. Joseph is a remote contributor