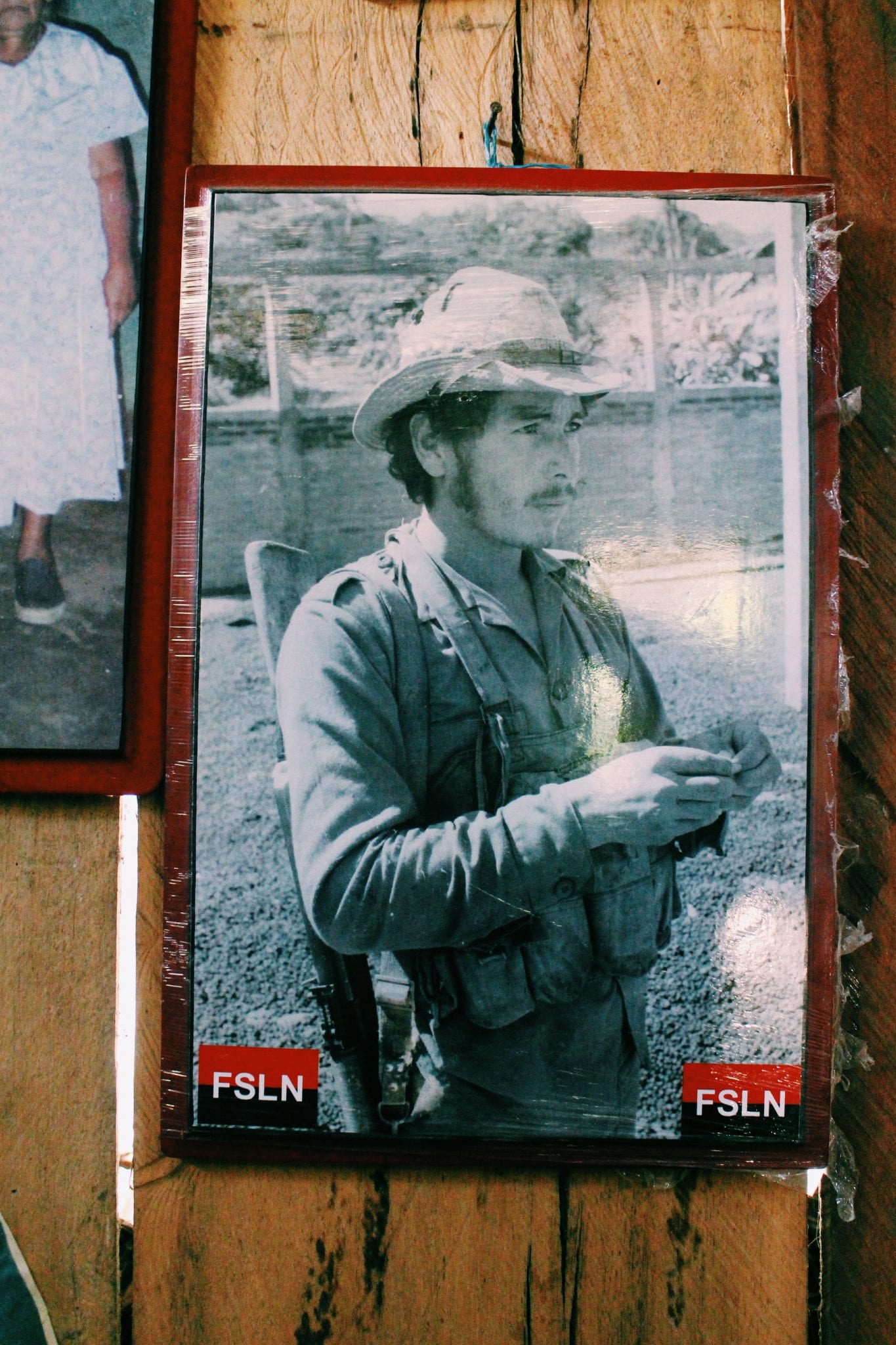 Nestled in the lush green hills of northern Nicaragua sits a community unmolested by the modern world. It’s hard to get to. You can only arrive there after a rough bus journey up sheer slopes and around winding switchbacks, where dust washes everything tan coloured. It is, however, worth the struggle. There lies the village of El Sontule in the Miraflor nature reserve, the headquarters of a guerrilla coffee movement.

SEE ALSO: How To Be A Gringo On A Nicaraguan Coffee Farm

Who is Don Adolfo?

The long civil conflict in Nicaragua went through several stages. Initially, in the 1970s, the Marxist FSLN (Sandinista National Liberation Front), a guerilla movement, fought for the eventual removal of the brutal, corrupt Somoza regime. Then it found itself precariously shoved into power. The FSLN paramilitaries became the army and fought a prolonged, bitter conflict against CIA backed “Contras”.

As the FSLN guerrilla leader in this time, Don Adolfo spent much of his service in the north-eastern Mosquitia region of Nicaragua. He served alongside a multitude of radical Marxists from countries such as Germany, Venezuela and Argentina.

Adolfo keenly reveals to us his guerrilla past. He shares stories of trekking in the jungle with volunteers from around the world, fighting for a Marxist cause. He also shares his battle scars, not immediately visible.

Perhaps choosing not to share the raw side of his civil war experiences, he tells us stories of having to trek across the thick jungle with 70 lb packs and learning to jump five-foot fences. He speaks fondly of the camaraderie, but I imagine we are spared the grittier stories.

He takes a more regretful tone however when he speaks about his chronic back pain and hearing difficulties—the souvenirs of the conflict. His back hurts because of the pack he carried. His hearing troubles stem from standing too close to the artillery without ear protection. In the house, there is an old photo of a proud young man in uniform. He says he is 24 years old in that photo, but his 1000-yard stare belies that.

A young Adolfo in his military garb. he also tells us of how being a soldier affected his life. He has back problems from carrying large quantities of equipment on his back. He has ear problems from spending too much time around artillery.

Don Adolfo receives around $1 (USD) per pound of coffee. He calls his strain of coffee, made from pure Arabica beans, “Uva de Oro” (Golden grape) and what he harvests goes direct to the local cooperative.

The farmhouse is extremely basic. A winding path through the brush leads to a wooden building. There is no plumbing: a long drop sits on one side, a well on the other. Inside, there are earthen floors, walls papered with cutouts from magazines, and an ancient tiny black and white television that sits stubbornly on a rickety table to demonstrate their rustic existence. And with fewer than 30 plants, Adolfo’s farm is really quite small compared to some of his neighbours’.

Don Adolfo and his family live a very simple existence. Here an ancient, tiny TV sits quietly (there is only solar generated electricity at night), with a backdrop of eccentric magazine wallpaper. Everything left over finds a use here.

After showing us his patch, he takes us to his neighbour’s much larger farm. Trekking through the brush we come across two men picking beans. Don Adolfo stands and chats merrily while they work. The small size of his farm, and his interaction with these men who seem deferential to him, suggests the focus of Don Adolfo’s efforts lie in a somewhat bigger context than just looking after his own place. The more one observes his activities and behaviour around others, the more one feels he is still the leader of before, although perhaps his struggle is something different nowadays.

The full name of the cooperative is ‘La Unión de Cooperativas Agropecuarias “Héroes y Mártires de Miraflor’ or: The Cooperative Union of Farmers ‘Heroes and Martyrs of Miraflor’, UCA Miraflor for short. The name is tantalisingly guerrilla-esque and Don Adolfo’s influence is evidently integral.

In fact, Don Adolfo helps manage the cooperative. In 1996, to give the community more control over the ecosystem and development of the area, the cooperative obtained protected nature reserve status for the region. This was an inspired act. It meant any decision making, development, and economic use of the land in the zone came completely under the control of the cooperative and the owners of the land, its people.

The crop on the larger farm requires several field hands to extract the beans from the plants. It is an intensive crop to harvest, and one wonders how much these guys earn doing it, considering the value in each bean.

In effect, turning the zone into a protected area prevents outside companies, investors, developers, and indeed the government, from being able to exert any real influence within. All decision making and management of Miraflor is done at a community level, without a single leader. It is an excellent microcosm of democracy.

Adolfo’s beans put through a large wrought iron miller emerge like this, sticky and dripping with syrup like substance, freed of the juicy red carapaces.

Lessons learnt from the past

They refuse help from the Nicaraguan government. Recently the government offered to build a running water infrastructure for the entire area, at a cost of $70,000 to the community, but this was rejected wholeheartedly. The community views proposed government projects such as this as an incremental attempt to take over the region, and they work carefully to prevent bureaucratic encroachment. In any case, a running water system is seen as unnecessary, and at the very least, a way for the government to earn money from the people within the reserve.

Don Adolfo is a true leader: quiet, charming, shrewd, and friendly. His Marxist guerrilla past has evidently influenced how he approaches his business and community today. The way in which the community of Miraflor has structured and protected its land and ecosystem is inspired. No one can meddle with their affairs—especially not corrupt, bloated government. Working in a cooperative ensures a good price for their beans. It also ensures a unified voice in the face of outside pressures.

Don Adolfo runs his own coffee plantation in the hills above Esteli, Nicaragua. He is deeply proud of his farm and his family. Here he is showing me his coffee plants.

The pride and independence of the community is deeply impressive. Lessons learnt in harder times—that you can fight and win against overbearing powers with cunning and guile—have been applied in a modern context. UCA Miraflor has used the system in place to protect itself. And their zealous attitude on the matter of government intervention leaves the sense that they will not soon be conquered. Don Adolfo is only one of many in this community who make it work. However, he is a noble and determined example of the character this community displays.

What are the biggest coffee production challenges facing producers today?
El Pino Coffeenomics: Why You Should Buy Third Wave
From Farm to Café, How Can Your Coffee Be More Sustainable?
Under The Microscope: What Does a Coffee Exporter Do?