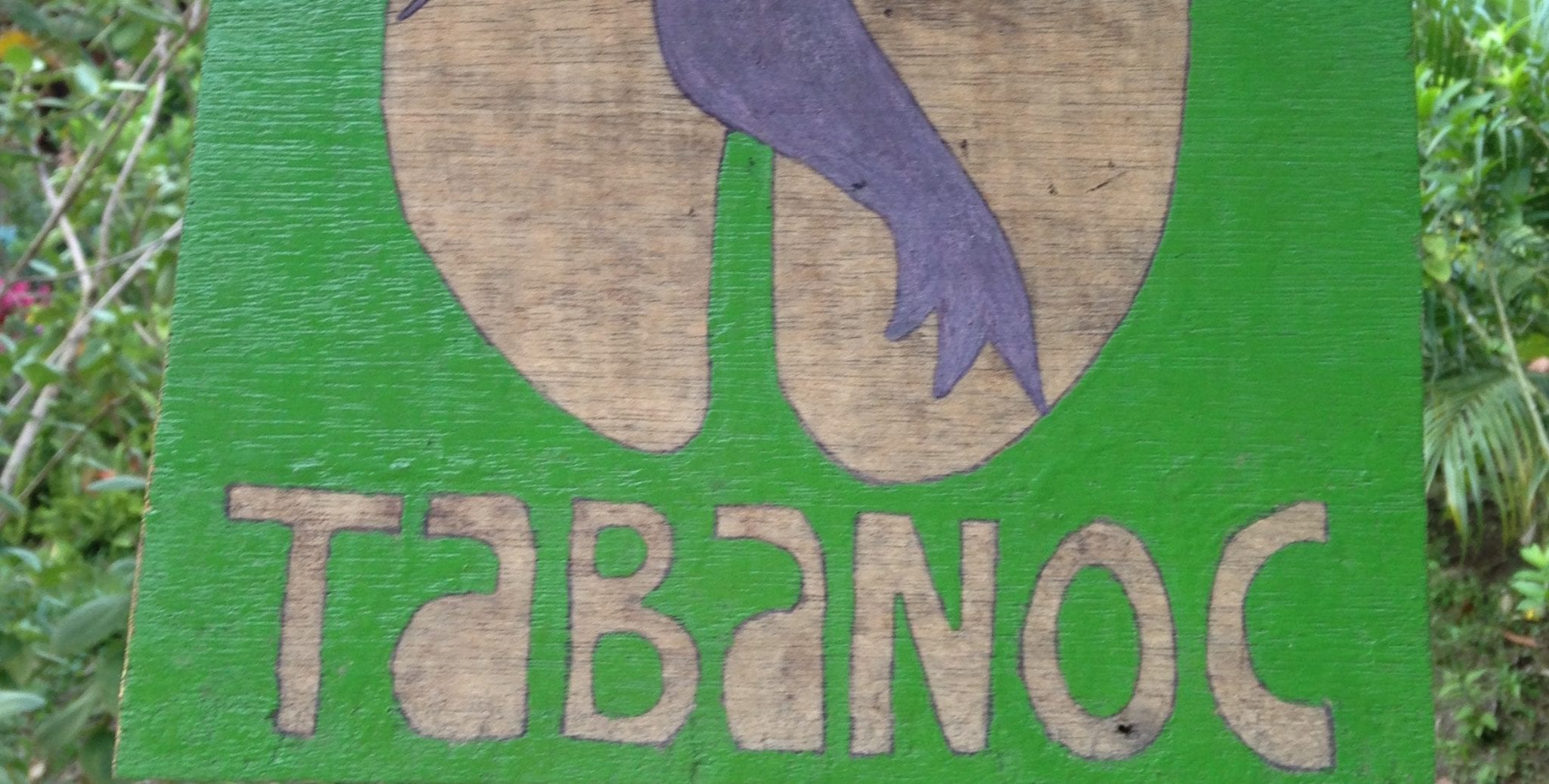 Located about an hour outside of Armenia, Colombia, it’s fair to say Tabanoc Farms is in the heart of coffee country. Arriving, however, feels more like traversing a giant brain. The back and forth ascent up the mountain road calls to mind a rocky cerebral cortex, constantly folding back on itself.  It makes for a dazzling—if bumpy—journey. Each switchback reveals a new vista of lush green hills below, an ocean of giant, slow rolling waves. As you round each bend, a little more of the mountain is revealed to you, but you get the sense that there is always another secret tucked away in the endless wrinkles of the cordillera central.

At last you arrive at the end of the road and the section on foot begins, a steep descent down a staircase of earth-filled tires into one last fold—with every few steps the air becomes cooler, fresher—until you arrive at an icy, clear mountain stream bubbling along in perennial shade. You cross a sturdily-built bridge of bamboo and begin the final ascent up more tire steps. The mist thins,  the sun reveals itself again and you emerge into Tabanoc Farms.

The famed Coffee Axis of Colombia

Tabanoc, which means “seed of love” in a local indigenous language, consists of two families. Paola, a Colombian, and Adrian, a Frenchman met Heidi, who is Dutch, and Jeffrey, also Colombian, at a nearby Eco village in 2013. Although they shared many values with those of the village, the two couples felt restless. They knew theirs was a temporary stop and they were eager to settle down to something permanent. With one young child and more soon on the way, the two families pooled their money, strength, and ambition to purchase a piece of land and build something all their own. Thus Tabanoc Farm was born, out of a desire to create a healthy lifestyle in which to raise a family. Or as Paola so charmingly puts it, “out of the desperation of pregnant women.”

Words like “build” and “create” are fully realized at Tabanoc, for in order to create the lifestyle envisioned by the two families, they had plenty of  building to do. When the families first arrived there was just a small house with a few run-down rooms, and some two and a half hectares of coffee that was all but lost to the jungle. Fixing up the house and recovering the rooms—not to mention adding those tire steps and the bamboo bridge—has made life a little easier, but there is still plenty to be done. Paola and Adrian are currently building their own house, and once they’re done, Heidi and Jeffrey will start on theirs. In the meantime, there are plenty of projects to be taken care of. In the three weeks I was there, there were at least a half dozen days that I said to myself, “Okay, this is the hardest day of work so far.” One day, while shoveling sand into sacks (to be hauled down to the farm and used in the construction of a waterless composting toilet) I said to Jeffrey. “This is the day,” I said. “This has to be the hardest day since I’ve been here.”

Adrian and Paola are using local materials and techniques

These techniques are fast being forgotten to construct this impressive house

Hard Work and a Beautiful Outlook

“Yes,” he agreed, “But we’ll find a good pace, and enjoy the work.” Four hours and two hundred sacks of sand later, my shirt drenched in sweat, various calluses open on my hands—calluses forming within calluses—I climbed up a pile of sand and rocks. Across the bowl-shaped valley tiny farmhouses dotted the hillside. The neon yellow leaves of banana trees marked the presence of coffee plantations – a solid tapestry of deep emerald. Further below, in the valley proper, the city of Armenia rose up. At this distance it looked still and silent. I have to admit, I did enjoy the work. Which is good, because as I looked down at the mound of earth I was standing on, I realized we’d barely made a dent in it.

What are the other projects do the residents of Tabanoc have their eyes on? A play place for the kids, a ceramics workshop, an upgraded pen for their two goats and a cable with a pulley to deliver groceries from where the cars park. Currently, they have to be carried down and up those steps in big hiking packs and a week’s worth of food means a few trips for everyone.

But What About Coffee Production?

Noticeably absent, to me at least, was any mention of expanding the coffee. The farm currently counts around 3,000 trees; a mix of the varieties Tavi, Castillo, and Caturra. With the amount of space the farm has, they could roughly double the number of plants. Still, for now the families are content with “improving through perfecting” their knowledge of the plant. In Colombia, it seems everyone has some kind of connection to coffee, but it’s one thing to grow up picking coffee and another thing to manage a harvest by yourself.

Adrian even told me that originally he would have preferred not to have coffee at all. But as they set about recovering what was already there and perfecting their care, harvesting, and processing of the coffee (which just so happens to be rather good), he came to be more and more interested in it. He came to enjoy it, he tells me, the way anyone enjoys picking up a new skill—“another arrow in the quiver.” This is a different kind of passion towards coffee—although quantitatively no less of one—than I´ve seen at other farms across Latin America, where the excitement over rare varieties, special processing methods, and high quality tends to carry with it the implicit (and sometimes explicit) economic point: someone will pay more for this.

This reasoning must have rubbed off on me because at first I was surprised at the apparent lack of interest the residents of Tabanoc showed in their coffee. Why did they not immediately take me on a tour of their plants and list off, like salesmen, the varieties, the altitude and cupping notes of their coffee? I kept probing, convinced that coffee was central to this farm instead of one facet among many, until at a certain point in our conversation, Adrian pointed out that, for as much as he enjoys working with it, “coffee isn’t food.” He said it so matter-of-factly, so honestly, that the common statistics touted about coffee—the second most popular drink after water, the second most traded after oil—suddenly seemed empty.

In addition to being a the farm’s coffee expert, Jeffrey is also a walking dictionary of natural medicines and a French-trained chef. If it’s his turn to cook, you can bet the sauces will be delectable

The idea that coffee can be—or should be—part of a well-rounded approach to farming runs contrary to the enterprising impulses of many. And yet, this same drive to dedicate more and more space to coffee has resulted in awkward situations such as the one I encountered while working in Nicaragua, where farmers invest everything in coffee which they sell in order to buy—vegetables! While from a strictly financial perspective there may be a sliver of logic to that, all it takes is one bad harvest, the arrival of Roya (leaf rust), or a sudden change in market prices to ruin a farmer.

Furthermore, coffee not only can exist as part of a well-rounded approach to farming, it often thrives as such. Banana, plantain, avocado, and citrus trees such as orange, mandarin,  lemon and lime are already common sights on coffee farms due to the shade they provide for coffee plants. At Tabanoc another common sight is yucca trees, and among the coffee plants grow other edibles, some for human consumption, and some that provide excellent nutrition for the chickens and goats that in turn provide eggs, milk, and nutrient-rich manure. Tabanoc Farms is still young, but it´s easy to see the pieces of self-sufficiency falling into place. Still, the families aren’t interested in isolationism so much as interdependence. They welcome volunteers from all over the world and are as much interested in learning from others as they are in sharing what wisdom they’ve acquired. The extra income generated from coffee helps support these connections as well as providing for necessities outside of just food—gas, electricity, and diapers for example.

A Path to Harmony

“Tabanoc is an alternative family project based on the desire to live in harmony with nature and with all human beings,” reads the back of Tabanoc’s coffee bags (they roast some of their coffee locally in Armenia). This harmony is the key lesson of Tabanoc. Indeed, living in harmony with nature means finding a way to cultivate coffee as a part of that harmony, not as an exploitative cash crop. The members of Tabanoc farm coffee with love, with respect, not with profit in mind but  simply because that’s how they do everything.They don’t treat coffee ‘specially’ – they treat everything ‘specially.’

Cooking, cleaning, and chores are shared amongst all the volunteers and residents. If it’s my turn to cook, you can bet it’s going to be pancakes

Harmony at Tabanoc means balancing coffee with food, balancing learning with doing and ambition with careful planning. It means finishing the food on your plate because you’ve burned so much energy from the day’s work, because nothing is wasted here, because after hauling sacks of tomatoes up seemingly endless, dirt-filled steps, you begin to see the value of food in a different light. Harmony at Tabanoc means balancing lofty idealism with gritty realism. When that balance is achieved, the division between each—once so firm— begins to dissolve and eventually disappear.