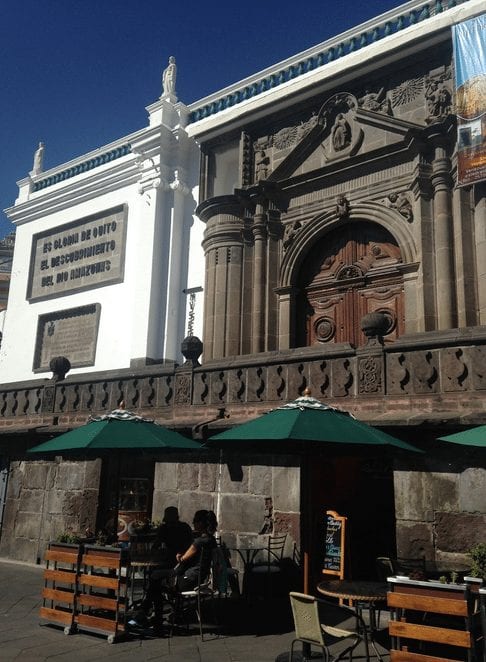 Tucked away high in the Andes Mountains, Quito is exemplary of that Latin American phenomenon of timelessness, where every once in a while you can find yourself in scenes that may as well be from the year 1515 as from 2015. Rounding a corner on the street, coming across a hidden plaza, or gazing at the intricate designs in and out of Spanish cathedrals—the Ecuadorian capital is abundant with moments such as this, that transport you to another era.

Nowhere is this more apparent than in the old centro histórico, where the colonial churches attract pilgrims, both secular and religious, and where street vendors wearing colorful scarves, bowler hats and long black braids sell cigarettes and gum. The heart of el centro is the Plaza Grande. Bordered by the presidential palace, the Municipal Headquarters of Quito, the Cathedral of Quito, and the Hotel Plaza Grande, the plaza is a microcosm of Ecuador in one bustling square.

Groups of tourists in floppy hats take pictures while impassioned preachers, Bible in hand, predicate the word of God. Older quiteños lounge on park benches and chat, or, more commonly, just stare off into space, and nestled amongst it all, the Dulcería Colonial serves up fantastic cups of coffee.

It would be easy to pass the Dulcería without a second thought. It is  a hole-in-the-wall (although, to be fair, the wall, part of the principal cathedral of the country, dates back to the 16th century), and is almost identical to the cafes that flank it. At first glance, it seems like just another cafeteria serving up the dreaded instant coffee all too common in these streets. However, a small chalkboard gives hope reading, “Coffee: Premium Quality” and goes on to list the variety, the altitude, and the farm of origin. Today the coffee is a Bourbón from Finca Maputo. A charming elderly man prepares an espresso with the lovely, mahogany-colored beans. A glass case showcases an enticing offering of baked goods. Atop the case are various brightly-colored pitchers, juices of fruits both familiar and unpronounceable; they seem to glow in the low lighting of the cafe’s interior.

Balancing the past with the present

Specialty coffee might be new to Quito, but the Dulceria Colonial has been around a while. Dating back to the 1980’s, owner Guadalupe Tito originally ran it more akin to other cafés dotted around the city streets, in which various generations of the same family serve up cheap – if uninspiring – food and the coffee. The coffee is often a brutally dark instant that can only be consumed with plenty of sugar. All that began to change, though, when Guadalupe’s son, Diego, began studying the art of being a barista under David Miño. It’s a story all specialty coffee lovers are familiar with—the first glimpse at coffee’s potential becomes an interest, and then a passion. Under Miño’s tutelage, he was soon competing on a national level, reaching the finals twice in two tournaments. He only started competing in 2014, but his star is rising fast – he’s already ranked number six in the country. Meanwhile, Diego took his new knowledge, skills, and success back to the Dulcería Colonial and before long proper espressos, creamy flat whites, and a host of other new beverages were being served alongside the traditional Ecuadorian fare.

Sipping a high-quality espresso in a colonial-era plaza is certainly a one-of-a-kind experience, but the most unique thing about the Dulcería Colonial is that more often than not, Diego’s adorable parents prepare that espresso. It’s an odd sight because in Quito, specialty coffee, like most innovations, is a young man’s game. If the city seems lost in time, you get the sense that most people are fine with that. To see Diego’s father grinding beans fresh and extracting a well-balanced shot makes it all the more charming. It’s clear that the family isn’t afraid of innovation, but they haven’t forgotten their roots either. Their other specialty besides coffee? A ham and cheese sandwich based on a family recipe from generations back. While the recipe hasn’t changed since the Dulcería Colonial opened, the family has recently introduced newer, higher-quality ingredients. As Diego explains, the move towards higher-quality coffee inspired them to ask how they could introduce that same quality into other products.

The future is history

What is the next innovation planned for the Dulcería? When I asked Diego this, his eyes lit up. “I’ll show you,” he told me and led me across the Plaza. On the other side is a bustling arcade filled with the typical mix of tourists, police officers and vendors of all kind of merchandise. Amongst it all is a large, inconspicuous doorway. Diego leads me through and, as if walking through time, we suddenly find ourselves in an empty, colonial-era courtyard. A large stone fountain dominates the center while an elegant white plaster arcade skirts the perimeter. We find ourselves compelled to lower our voices as the chatter of the city is suddenly muted even though, through the portal, we can see people passing by. Even the sun seems to shine differently here; it’s warmer and brighter. Diego smiles at me. “This is how I want the Dulcería Colonial to feel,” he says. I observe that it’s a unique opportunity that they can create such an atmosphere and not feel out of place. I observe that they’re not that far from achieving it already. And then we walk through the portal and exit back out to the plaza.

Notable Feature: Being the only place open in perhaps all of Quito before 10 am on a Saturday and after 3 pm on a Sunday.

How Flow Profiling Impacts Espresso Extraction
What is cold-pressed espresso?
Gravimetric vs Timed Grinders: The Espresso Consistency Debate
Rethinking Coffee in Italy, The Capital of Espressos