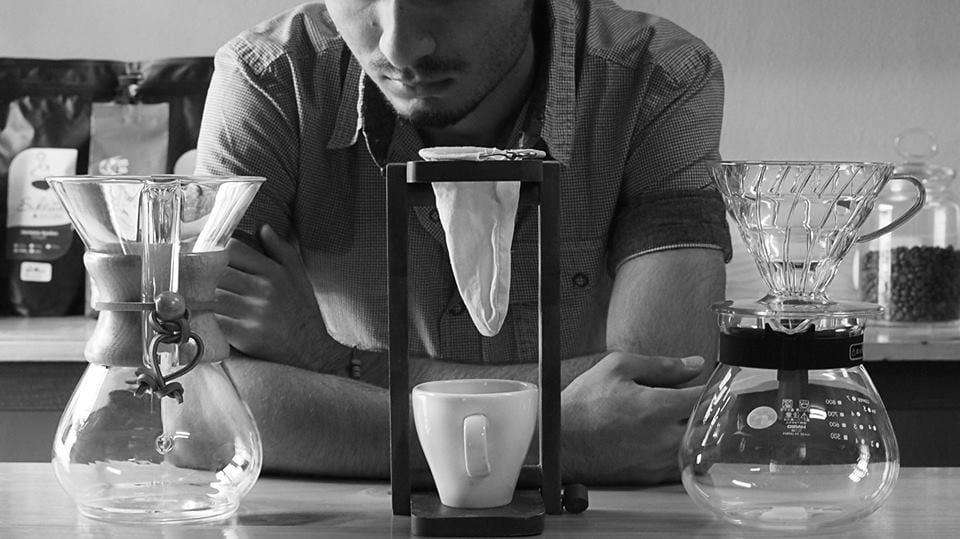 F Solano caught up with Ariel Bravo, twice runner up at Costa Rica National Championship & 2013 Reto Champion. We share his perfectionist ethos: “coffee is…all about learning”. Ariel has recently commenced his own “Third Wave Mission”, launching “Yök“slow brew bar in C.Rica. What’s that? Yök, meaning drink in indigenous Bribi, will be a space where customers can enjoy a filtered coffee whilst simulaneously learning about their coffee & Costa Rica’s 8 coffee regions.

Before We Talked About Costa Rica Coffee Coffee Shop Culture, We Learned About Ariel…

Coffee is a culture with many different factors. It incorporates the country’s culture, the producers, the beverage, the preparation, and every person involved in the process. Coffee is a term that embraces many things, not just the beverage it includes the culture of preparing and drinking it.

What do you believe specialty coffee to be?

The future of specialty coffee is in the hands of the new generations along with the different brewing methods like Chemex and V60, which are the best ones to explore in detail the flavors. Commercial coffee is the most consumed in Costa Rica.

What was your first encounter with coffee?

I didn’t like coffee. When I entered the competition world and tasted a good coffee for the first time, I became curious about it and that’s how I decided to enter full time in this world. Once you go in, you can’t get out of the coffee world.

Name your most outsanding coffee moment?

There are several. You get to meet people, producers and you start appreciating everyone’s effort and one as barista has to validate this and the coffee’s quality. In my competition world, every time I finish a presentation I feel very proud of my performance and the fact that I praise the name of the coffee I used.

I have been runner up twice at the National Barista Championship and Champion at Reto Barista (2013).

Stone cold faces from the judges.

Why do people drink coffee?

Coffee is a way of sharing with people. Rarely you go and have a cup of coffee alone, you always go with friends, your couple; it’s a social lubricant.

What is most important to the consumer when selecting coffee? ?

It should be prepared just as the customer likes it. If the customer is looking for a strong black coffee or maybe something weaker just prepare it as they like it. You get to know the customer’s taste after a while.

Do consumers know or care about where coffee comes from? ?

I think (long pause), maybe yes but as barista you have to find the way to do it while preparing the perfect cup, so while drinking it, the customer can sense what’s behind that cup of coffee, a group of people. .

“Customers can be interested, but you just have to awake that interest in them that by telling them a story”

What characteristics do people look for in their cup? ?

You have to divide Costa Rica into 2, the customer that has some knowledge and the one that does not. Based on that, the ones that know a little more about coffee look for perfection in their cup compared to the ordered beverage. The person that doesn’t know about coffee will only expect a good tasting cup. It’s the barista’s job to transmit the knowledge to the customer so next time he or she will have some criteria to choose the coffee that best suits its preference. I implore anyone who comes to Costa Rica to visit a Costa Rican Coffee Shop and trust in the barista that serves them! Our country is a beautiful paradise, as the options from Buena Vista del Rincon would suggest and this is reflected in our coffee culture.

What are their drinking habits?

Ticos (Costa Ricans) drink a lot of coffee. I have reviewed some stats that show that the yearly per capita consumption is 3.35 kg. It’s one of the highest in Latin America. This habit is also divided by age; the new generations are not drinking as much coffee, especially the ones between 12 to 24 years. Costa Rica is not an espresso drinking country and that’s why you have to innovate. Ticos will always order filtered coffee.

What are the rules & taboos of coffee drinking?

At breakfast around 9 am they drink their first cup. Then at lunch some people drink it as a digestive and then again in the afternoon usually with some appetizer. Normally Costa Ricans don’t drink their coffee alone, they always go with someone else and most of the time, they will add sugar to it.

What cultural traditions are infused with coffee?

What goes with coffee?

Talking about specialty coffee, it’s a tendency; ticos are starting to notice that Costa Rica has a great coffee that is not being served to its own people, even when it is a producing land. The customer in general is becoming more demanding.

How long does it take to get a cup of coffee?

“Commercially, innovation is a must because the specialty coffee market is growing”

Ariel was keen to discuss the National Barista Championship…

What did it mean to you ending runner up at your first National Barista Championship?

The first time you compete you really don’t know what you’re doing, it’s all about learning. It helps you grow and see how things really are. I used to train with other team mates and we never thought about experimenting with the coffee flavours. Training and passion is what I like.

I started to fall in love with coffee in 2012. I started training a year before competing but I actually entered this coffee world because I wanted to become a chef. It never crossed my mind studying something that I didn’t even like to drink. I was curious about cocktails but I couldn’t enroll; only a barista course was left and I decided to take it. During the second lesson I was so ashamed because I felt very ignorant. I called my dad and told him “I’m quitting, I don’t understand anything”. I kept going and in the end I liked it and most important I had the ability. My teacher, Ricardo Quesada, trained me for the first competition and that led me to meet many important people in the Costa Rican coffee scene.

What do you expect from this National Barista Championship?

It will be very interesting because Ricardo Azofeifa is going to compete; he has a lot more experience. He roasts his own coffee, he has been surrounded by coffee his whole life, he was born in a producing region. In my case my family is not related to coffee; it’s 2 different visions. Ricardo was the person who inspired me to compete so it’s going to be like competing against the master, it’s inspiring.

What made you compete?

Competing makes you look for perfection. I’m a perfectionist and that’s why I felt attracted to it. The best part of competing is looking for coffee, roasting it, cupping it, creating a roast profile, etc. It’s very complex but interesting at the same time.

We love this dude: “This year I’m hoping to win, this might be the year that will change the way you drink your espresso”.

A Day in a Coffee Producer’s Life
How Roasters Can Build Good Relationships With Coffee Producers
What’s a Fair Price For Coffee? Interpreting Transparency Data
Producer Stories: Why 1 Young Salvadoran Returned to Coffee