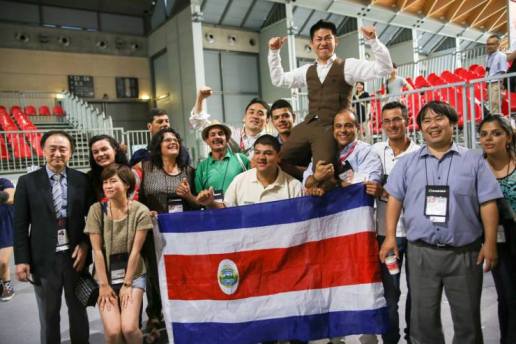 A Motivational Shot from Hidenori

Fabiola enjoyed caffeinated espresso shots and even relished “motivational shots” whilst listening to Hidernori’s presentation on his “coffee journey” with an audience at Café Don Mayo and chatting to him afterwards about her personal barista aspirations.

Fabiola now believes “craziness” is  crucial part of becoming a World Barista Champion. Making his own choices and believing in himself allowed Hidenori to achieve his dream…

Read below to see what Fabiola learnt from the inspirational barista master….

The Best Time to Start Competing Is Now

Before he started sharing his own experiences, Hidenori asked the audience who planned to compete this year. Silence reigned and only one hand was raised. Hide was shocked to find out only 6 baristas were competing this year, compared to 160 Japanese competitors. He then asked, ” who here would like to compete in the future?” Sitting in the front row, right in front of him, I raised my hand and said, “I want to compete but not this year because I don’t have enough experience”. That sounded like a cheap excuse to him and he proceeded to explain how many others had responded with the same comment. I then received the motivational shot I needed; “Just compete” Hide said. “Competing is the start of the journey; many postpone the start because they think they don’t have enough experience, but you just need to begin competing.”

Why He Chose Costa Rican Coffee

Hide’s journey to the WBC started 2 years ago when he met Enrique Navarro, a 22-year-old farmer. He was interested in the idea of working side by side with a younger person because he knew innovation was the key to success and felt that someone from a younger generation would grasp this concept. Hide had previously worked with Monte Copey’s coffee because his boss Kentaro Maruyama had been importing coffee from them. Izaki was determined to use Monte Copey’s coffee, but he was concerned about the acidity of the espresso, due to the coffee’s plantation elevation of 1900 masl.

To achieve the perfect coffee, they came up with the idea of espresso and cappuccino – focused beans. Both coffees were specifically produced to meet Hide’s precise flavor requirements.

“Make it simple! Baristas are professionals serving coffee, why don’t we make it simpler? In the end judges are customers too.” That was Hidenori’s concept but at the same time, his presentation was full of information. His first rehearsal took 30 minutes…

In order to accomplish the 15 minutes required, he handed the judges a booklet full of technical details and the highlights of his presentation. He knew how and when to speak to the judges and gave them plenty of time to score his beverages. It was obvious he had been working diligently on his English accent and his oratory skills.

What’s next for Hidenori?

His next step is to become a green buyer. His goal is to bring producers and baristas closer. Why? Baristas know what their customers want and this can offer ground – level input for the producers when growing their crops. He also wants to continue working for Maruyama Coffees in their quest for importing the best. Before the meeting was over, he shared with us a little more of his passion. He related a story about how his friends thought he was crazy when entering the coffee world. He would barely go out because he was either at one of his 2 jobs or studying because he wanted to learn as much as possible. When he was 17 he dropped out of high school and didn’t have a clear goal in life. He started working for his father, and his path became clearer. He finished high school and majored in Cultural Studies.   Even though Hidenori won the competition, his friends still think he’s crazy!

Patrik Karlsson: 6 Steps to Developing a Competition Strategy
Being Black in Specialty Coffee
Specialty Barista Wages Around The World
Training Tips: How to Improve Your Coffee Career and/or Business